The starting point is 1366 (14th century). According to tradition, the beginning of the cult and veneration of the sacred figure comes from the moment when a tiny figure, barely 6 cm high, is found under the plows of a plow of the farmer Perot de Granyana, to the feet of a lledoner. This farmer worked his fields from the departure of La Plana, where, approximately, today is the basilica. The plow stopped when it encountered an obstacle that stopped its advance; the animals ceased their steps and prostrated themselves before the tree. The farmer, strangely, searched through the earth for the obstacle and picked up what at first could be a stone. When he saw her, he realized the particular way he had; it was a white alabaster stone that, sculpted rather roughly, seemed to mimic the figure of a woman praying.

Perot took the figurine and took it to the city to show it to the authorities. Since it was late and everything was closed, the farmer had to take her home and wait for the next day. When it dawned, this figurine had disappeared to the amazement of our farmer. Perot found her again that same day, in the same place, and took her back to the city. This process is repeated, and the small image disappears again from Perot's house. At the insistence of the farmer, and thinking he was crazy, the City Council accompanies him to the exact point of the discovery of the image, and, there, the miracle occurred: Perot and the Council found the figure surrounded by angels. Before the celestial apparition the Municipal Council made the decision to build a small hermitage in the place of the troballa. This story of the Holy Troballa is reflected in the canvases that are next to the main altar of the basilical temple. 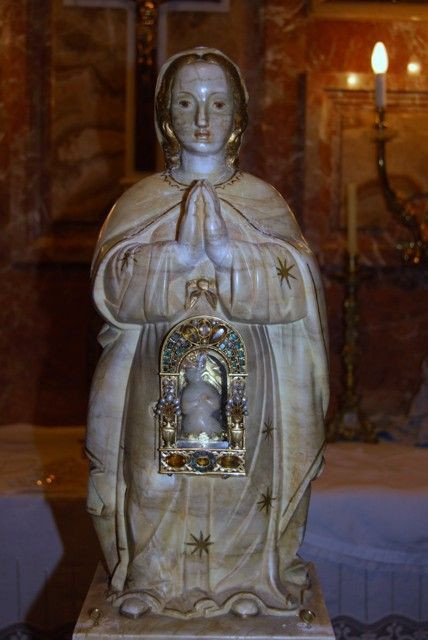 From 1638, the troballa was placed in an open excavation in the chest as a niche of a larger image, which since then assumes the condition of reliquary image. She is standing, without the baby Jesus in her arms and with her hands together in an attitude of praying. Although the troballa remains within the reliquary image, what will change will be its location within the church.

Over the years the image will go through different stages, always influenced by the prevailing tastes according to the artistic periods through which it goes through. But the most important and remarkable fact is without doubt the influence that the Spanish Civil War had on the reliquary image. The image, which until that moment was on the altar, in 1936, at the beginning of the contest, was violently thrown from its throne to the ground, the head and hands disappearing, and thus mutilating the image.

Subsequently, a new image-reliquary was created by Tomás Domingo Colón and polychrome by Juan Bautista Porcar to replace the one that was destroyed in the war. Blessed in 1939 this image is the Virgin Mary Immaculate with her hands in prayer position. It is covered with its characteristic mantle and in the chest of the image is excavated the oven that contains the image of the Virgin Mary, found at the foot of the lledoner. This image-reliquary is the one that is still venerated today, and that is in the Main Altar of the Basilica.